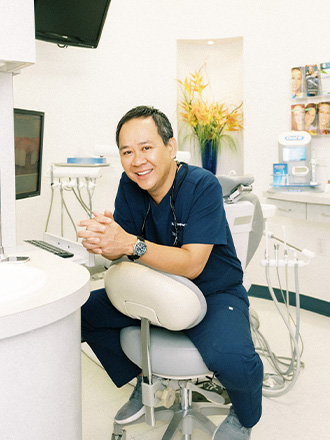 In 1992, Dr. Joseph Orosa Paraiso graduated from Centro Escolar University in Manila, one of Asia’s best dental schools, and then went on to become one of the youngest foreign graduate dentists in California. In 1996, he completed a yearlong residency at the Center for Esthetic Dentistry at UCLA. After working for several group practices in the Central Valley and Santa Cruz County he found his way back to the Bay Area to put up his own practice in 1999. He has pursued hundreds of hours of post graduate studies in many of the sub-specialty areas of general dentistry including his surgical training for dental implants under world renowned oral surgeon, Dr. Arun Garg in 2012.

Dr. Paraiso has been seeing patients at his Mountain View office for more than 20 years and he has always been especially proud of his practice, not only because of his impressive office and state-of-the-art equipment, but also because of the principles and high moral standards he works by. “Both of my parents practiced medicine while I was growing up and what impressed me the most was the genuine concern and respect they had for every patient. It is important to me to work by the same ideals so that all my patients get the personalized care that they deserve, down to the last detail. I enjoy getting to know my patients. I want to show them how pleasant and relaxing a visit to the dentist can be.” In his free time, Dr. Paraiso loves playing golf and tennis, skiing in winter, and scuba diving during his yearly summer vacations in the Philippines with his wife and four kids.

Website Powered by Sesame 24-7™ | Site Map
Back to Top